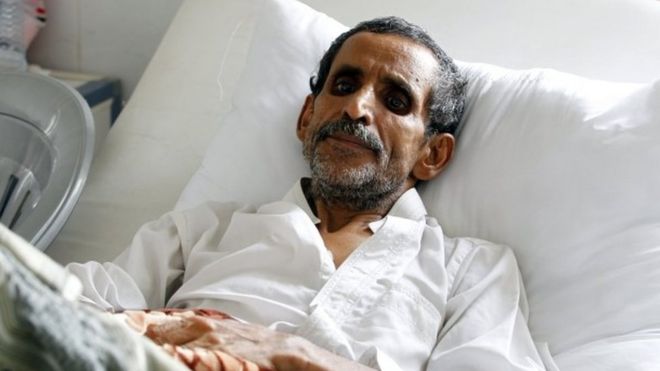 Yemen is now facing the worst cholera outbreak anywhere in the world, the United Nations has warned.

A statement by Unicef and the World Health Organization says the number of suspected cholera cases in the war-torn country has exceeded 200,000.

So far more than 1,300 people have died – one quarter of them children – with the death toll expected to rise.

The two UN agencies say they are doing everything they can to stop the outbreak from accelerating.

“We are now facing the worst cholera outbreak in the world,” the statement says.

“In just two months, cholera has spread to almost every governorate of this war-torn country,” it says, with an estimated 5,000 new cases every day.

Yemen’s health, water and sanitation systems are collapsing after two years of war between government forces, backed by a Saudi-led coalition, and the rebel Houthi movement.

The rebels control much of the country, including the capital Sanaa.

The UN says it is deploying rapid-response teams to go house-to-house telling people how to protect themselves by cleaning and storing drinking water. But clean water is in short supply.

Cholera is an acute diarrhoeal infection caused by ingestion of food or water contaminated with the bacterium Vibrio cholera.

Most of those infected will have no or mild symptoms but, in severe cases, the disease can kill within hours if left untreated.

The war has left 18.8 million of Yemen’s 28 million people needing humanitarian assistance and almost seven million on the brink of famine.